The Sorcerer - A Demon Summoner class for AD&D 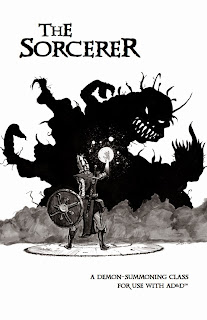 ... so I made THE SORCERER. It's a class for use with AD&D that summons elementals & demons and tries to force them into servitude. It's a 24 page digest-size pdf, and includes the Sorcerer class description, guidelines for summoning & binding, stats for minor elementals, details on the six demon types (Destruction, Suffering, Creation, Insanity, Ideas, and Shifting), random demon generation guidelines, and some brief suggested house rules to make AD&D feel a little more like the Michael Moorcock inspirational material. THE SORCERER should also work just fine with Swords & Wizardry, B/X D&D, Original D&D, or any of the other usual suspects.


Ian Baggley illustrated the cover beautifully. Right now it has no interior art. I'll commission interior art later; the rectangles in the pdf are artwork placeholders. But first I need to playtest it.

If you run this, I'd love to hear your feedback!
Posted by Guy Fullerton at 12:37 AM